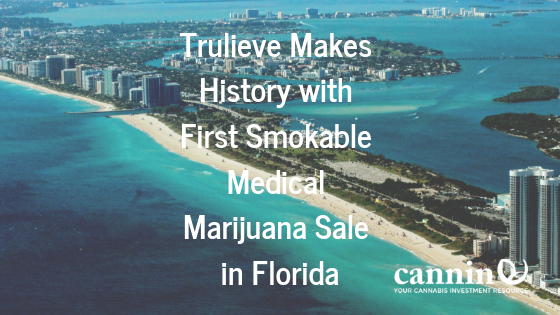 Trulieve (OTCPK:TCNNF), Florida’s largest medical marijuana provider announced on Thursday that it has received approval from the Florida Department of Health to begin selling whole-flower buds in its dispensaries. The company currently operates 26 dispensaries in Florida. The first whole-flower smokable product was sold at Trulieve’s Tallahassee dispensary.

In a news release, Trulieve CEO Kim Rivers said, “Offering these whole flower products to our patients in their purest, most-effective form is something we — and patients — have been looking forward to since we opened the doors of the state’s first dispensary,”

The company announced that it will start selling a variety of popular whole-flower strains statewide. Its lineup of medical marijuana products will come in a wide selection of forms including pre-rolled.Its first smokable medical marijuana was sold at its Tallahassee dispensary to Douglas Dixon.

There are more than 190,000 members with active ID cards registered with the medical marijuana patient registry according to the Office of Medical Marijuana. It is estimated that Trulieve sells 60 to 80 percent of the State’s overall volume.

Want to get the latest news or find the best cannabis companies to invest in? Sign up of Cannin Free Access.

Subscribe to the Cannin Chronicle. We’ll keep you informed on all things cannabis and help you determine which cannabis companies have the highest growth potential.