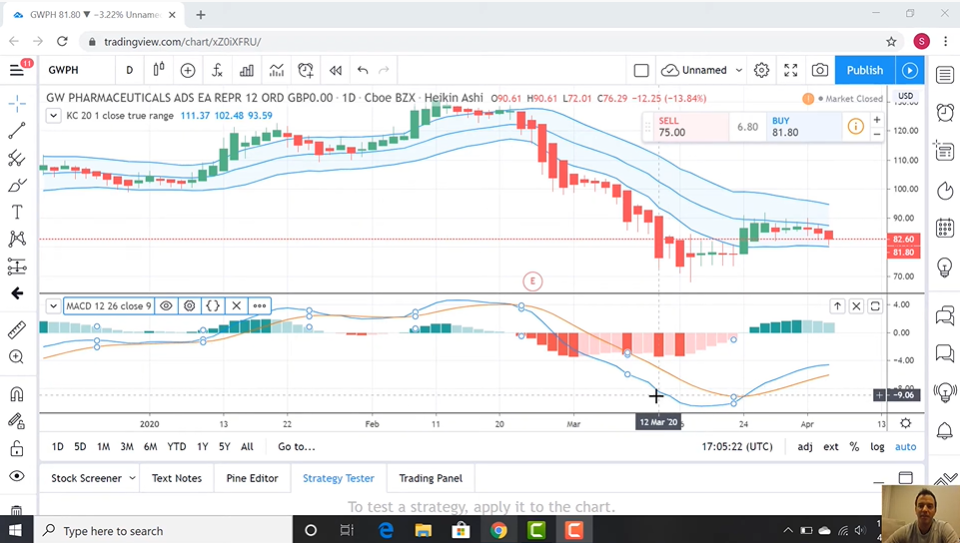 Follow Stephen Goldman as he shows you how to evaluate this trading opportunity using Keltner channels and the ever-useful MACD to find opportunities to trade the behemoth stock GW Pharmaceuticals.

What is the MACD and why does it matter?

For reference, the MACD, short for moving average convergence/divergence, is a trading indicator used in technical analysis of stock prices, created by Gerald Appel in the late 1970s. It is designed to reveal changes in the strength, direction, momentum, and duration of a trend in a stock’s price.The MACD indicator (or “oscillator”) is a collection of three-time series calculated from historical price data, most often the closing price. These three series are the MACD series proper, the “signal” or “average” series, and the “divergence” series which is the difference between the two. The MACD series is the difference between a “fast” (short period) exponential moving average (EMA), and a “slow” (longer period) EMA of the price series. The average series is an EMA of the MACD series itself.

The MACD indicator thus depends on three-time parameters, namely the time constants of the three EMAs. The notation “MACD(a,b,c)” usually denotes the indicator where the MACD series is the difference of EMAs with characteristic times a and b, and the average series is an EMA of the MACD series with characteristic time c. These parameters are usually measured in days. The most commonly used values are 12, 26, and 9 days, that is, MACD(12,26,9). As true with most of the technical indicators, MACD also finds its period settings from the old days when technical analysis used to be mainly based on the daily charts. The reason was the lack of modern trading platforms which show the changing prices every moment. As the working week used to be 6-days, the period settings of (12, 26, 9) represent 2 weeks, 1 month and one and a half weeks. Now when the trading weeks have only 5 days, the possibilities of changing the period settings cannot be overruled. However, it is always better to stick to the period settings which are used by the majority of traders as the buying and selling decisions based on the standard settings further push the prices in that direction.

The MACD and average series are customarily displayed as continuous lines in a plot whose horizontal axis is time, whereas the divergence is shown as a bar graph (often called a histogram).

A fast EMA responds more quickly than a slow EMA to recent changes in a stock’s price. By comparing EMAs of different periods, the MACD series can indicate changes in the trend of a stock. It is claimed that the divergence series can reveal subtle shifts in the stock’s trend.

Since the MACD is based on moving averages, it is inherently a lagging indicator. As a future metric of price trends, the MACD is less useful for stocks that are not trending (trading in a range) or are trading with erratic price action.

What is a Keltner channel and why does this matter?

Keltner channel is a technical analysis indicator showing a central moving average line plus channel lines at a distance above and below. The indicator is named after Chester W. Keltner (1909–1998) who described it in his 1960 book How To Make Money in Commodities. This name was applied by those who heard about it from him, but Keltner called it the ten-day moving average trading rule and indeed made no claim to any originality for the idea.

The lines above and below are drawn a distance from that center line, a distance which is the simple moving average of the past 10 days’ trading ranges (i.e. range high to low on each day).

The trading strategy is to regard a close above the upper line as a strong bullish signal, or a close below the lower line as strong bearish sentiment, and buy or sell with the trend accordingly, but perhaps with other indicators to confirm.

The origin of this idea is uncertain. Keltner was a Chicago grain trader and perhaps it was common knowledge among traders of the day. Or in the 1930s as a young man, Keltner worked for Ralph Ainsworth (1884–1965) backtesting trading systems submitted when Ainsworth offered a substantial prize for a winning strategy, so it could have been among those. But ideas of channels with fixed widths go back to the earliest days of charting, so perhaps applying some averaging is not an enormous leap in any case.

Later authors, such as Linda Bradford Raschke, have published modifications for the Keltner channel, such as different averaging periods; or an exponential moving average; or using a multiple of Wilder’s average true range (ATR) for the bands. These variations have merit but are often still just called Keltner channel, creating some confusion as to what exactly one gets from an indicator called that.