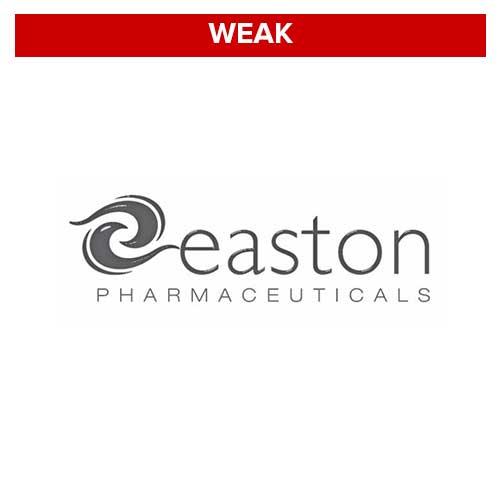 Focus:
Easton Pharmaceuticals is more than a pharmaceuticals company. It does own and market drugs to treat cancer and other therapeutic products to treat other conditions. It is also developing a cannabis cultivation business. And it recently bought an interest in a Toronto real estate development project for residential housing. In August 2018, it also signed an LOI to buy a stake in a European casino resort.

Markets:
Primary: Easton owns and distributes pharma products in several countries. It just bought an operating Greek casino
Secondary: It is developing a cannabis cultivation business and we believe intends to sell wholesale.

Operations:  Weak
Cultivation:
Current production: 0
Future production: Unknown. It has enough ag land to produce over 200,000 kgs year, but will need upwards of 2 years to make this happen if it dedicates to this goal.
Canadian market size: In 2017, the total Canadian cannabis market, including black market, was estimated at roughly 600,000 kgs, or $4.8 billion. Health Canada predicts Canadian cannabis demand in early 2019, after adult use legalization, could soon reach 1 million kgs/year, and up to $$8-10 billion in revenue in a few years. Current industry inventory is estimated at 300,000 kgs, implying a large shortfall later this year.
Distribution:
It has no cannabis production or distribution yet. It owns distribution rights to several drugs on several continents.

Risks: High
All cannabis companies present risks due to the newness of the industry. This company is extremely risky since it has no revenue yet, and has, by one source, over 1 billion shares outstanding. This is an absurdly high number that puts shareholders in a weak position to make money.

Recommendation: Weak
With no revenue and a huge number of outstanding shares, this is not a company to invest in at the current time.