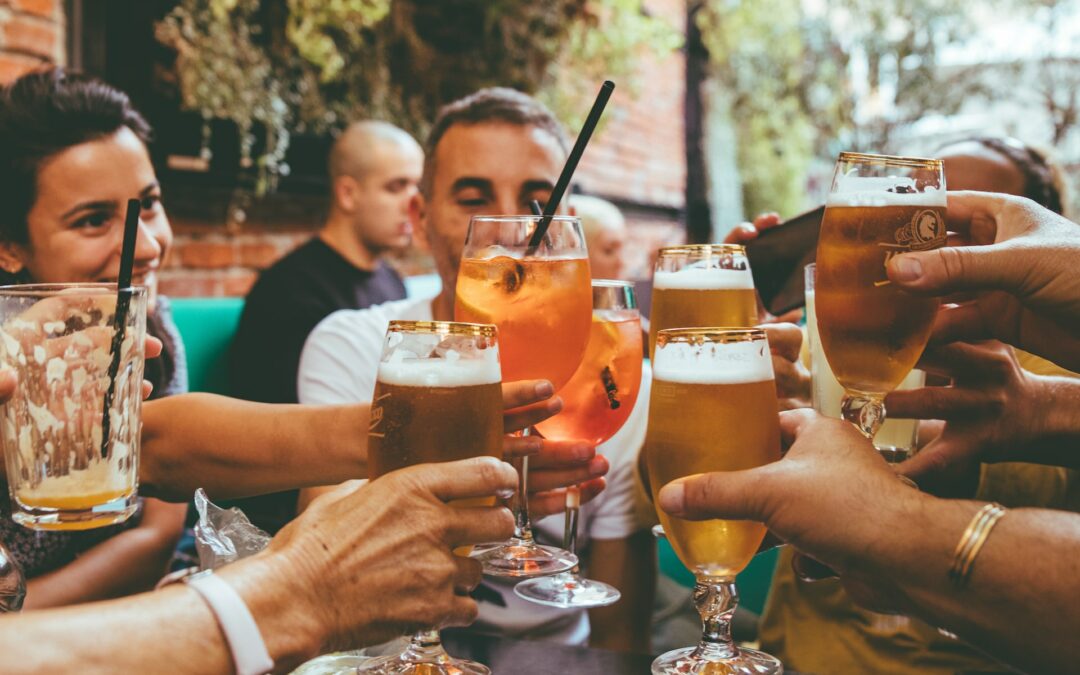 One likely reason for the growing public aversion to drinking is the rise of the sober-curious movement. Celebrities like Bella Hadid, Blake Lively and Katy Perry have founded non-alcoholic beverage brands and championed the concept of sober social lifestyles that epitomize health over hedonism.

While some consumers are chasing sobriety in its entirety, others are becoming “Cali-sober,” meaning they cut out alcohol but continue to consume other substances such as cannabis. If health and wellness are the ultimate goals, does smoking weed have similar effects as drinking liquor? Here’s what we know about how the substances impact the body and mind.

Your Brain on Alcohol

Alcohol consumption rapidly affects the body. After being absorbed through the lining of the stomach into the bloodstream, it spreads into tissues throughout the body and reaches the brain in about five minutes, according to Northwestern Medicine. Euphoric effects generally kick in within the first 10 to 15 minutes and are correlated with transient changes in the brain’s electroencephalographic activity (EEG) activity. Essentially, as blood alcohol content (BAC) rises, marked changes can be seen in the electrical activity of the brain.

During the early stages of drinking, the brain releases more of the “feel good” chemical dopamine. This chemical surge provides temporary relief from negative emotions and can produce increased confidence, sociableness, relaxation or elation.

In the later stages, drunkenness can generate a combination of blurred vision, delayed judgment, lack of coordination, emotional instability and high excitability. As BAC rises, alcohol users can segue from excitement to confusion and even a blackout state where consciousness is temporarily lost. Long-term alcohol consumption can produce physiological changes in the brain such as tolerance and physical dependence. As individuals continue to have alcoholic beverages over time, their brains may change structurally and transition from occasional drinking to chronic consumption, according to the National Institute on Alcohol Abuse and Alcoholism.

Your Brain on Weed

One of the most common ways to ingest cannabis is through smoking. THC, the psychoactive chemical in cannabis, is almost instantly absorbed and quickly reaches high blood concentration after inhalation through the lungs.

After cannabis is ingested, an observable increase in regional cerebral blood flow (rCBF) occurs in anterior brain regions — which are critical for semantic memory, according to a 2001 study in Neuropsychopharmacology. Another area of the brain, the hippocampus — which is responsible for memory formation — is altered from cannabis ingestion, possibly leading to memory impairment among users, based on studies that have mostly been limited to mice and animals. Similar to drinking alcohol, smoking marijuana results in intoxication and users report feelings of happiness, confusion, relaxation, impulsiveness and hunger.

Many cannabis users report the “munchies,” a phenomenon where pot users have increased appetites and cravings while high. Because cannabis affects cannabinoid receptors in the olfactory bulb in the brain, food can smell and taste more intense. THC also increases the release of dopamine (which makes eating more enjoyable) and the hormone ghrelin, which stimulates hunger.

While cannabis is widely viewed as a non habit forming drug, it seems that some people can build a tolerance to THC. Some users also find themselves unable to stop using cannabis despite negative impact on their life or health, resulting in cannabis use disorder (CUD).

Cut From the Same Cloth?

Whether it’s the euphoric feeling from a few glasses of wine or the airy-giggly state of mind after a blunt, the pleasure relates to the same brain chemical: dopamine.

The amygdala, a key part of the brain associated with emotions and rewards, plays a central role in alcohol-induced effects on the brain. When drinking signals a high dopamine release, it can teach the brain to repeat the behavior in hopes of receiving the same result. Similarly, the THC in cannabis causes an increase in levels of dopamine in the brain and this motivates people to keep using it. Both CUD and alcoholism are predicated on the idea that users have developed an attachment or addiction to the way their substance of choice makes them feel and have transitioned from recreational to disordered use.

Chronic or excessive alcohol consumption is known to affect balance and disrupts normal walking patterns. This is because alcohol can damage parts of the brain responsible for coordination, including the cerebellum. Akin to this, cannabis use can also affect coordination and motor skills because THC can interfere with the functioning of specific sections of the brain like the cerebellum and the basal ganglia.

Some studies suggest that long-term cannabis use is associated with a loss of volume in the cerebellum and poorer sleep quality. Beyond lower quality rest, some subspecies of cannabis — commonly referred to as strains — induce “couchlock,” which is a deep sedative state which usually includes heavy-feeling limbs and tiredness. Tiredness is a symptom that both cannabis users and alcohol drinkers can both experience from their respective substances.

“With cannabis it can make you sluggish depending on what product you’re using,” says Joseph Rosado, a family physician and author of Hope and Healing: The Case for Cannabis. “So if you’re using a product that is more of an indica dominant, or a hybrid that’s indica dominant, it’s going to make you somnolent. It will make you sleepy. And so in that sense, it’s not that you’re going to be uncoordinated. You’re just going to be sluggish.”

Some alcohol enthusiasts tout the advantages of drinking by citing the potential health boosts such as the reduced risk of heart disease for infrequent drinkers and the benefits of polyphenols in red wine, which have antioxidant properties. Cannabis also has health and medical benefits which include reducing pain, improving sexual libido, treating inflammation, easing symptoms of Lyme disease and acting as neuroprotectants.

When it comes to drinking alcohol and smoking cannabis, the road to health is complex and individual experiences may vary. However, despite one drug being more socially stigmatized than the other, both substances have their benefits and pitfalls when it comes to consumption.