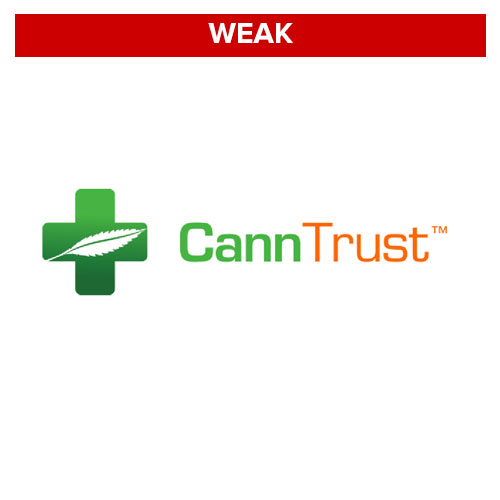 VAUGHAN, ON, March 12, 2020 /PRNewswire/ – CannTrust Holdings Inc. (“CannTrust” or the “Company”, TSX: TRST,NYSE: CTST) today provided a status update in accordance with its obligations under the alternative information guidelines set out in National Policy 12-203 – Management Cease Trade Orders (“NP 12-203”), which require the Company to provide bi-weekly updates until such time as the Company is current with its filing obligations under Canadian securities laws. As previously announced, the Company is subject to a management cease trade order (“MCTO”) issued by the Ontario Securities Commission. The MCTO prohibits the directors and executive officers of the Company from trading in or acquiring securities of the Company until two full business days after the Company files an interim financial report for the three and six month periods ended June 30, 2019, an interim management’s discussion and analysis for the corresponding period and certifications of interim filings. The MCTO does not affect the ability of investors who are not insiders to trade in the Company’s securities.

CannTrust remains in default of its disclosure obligations under securities legislation, has no meaningful revenues, has terminated or laid-off a significant portion of its workforce, is facing a variety of regulatory investigations, and has significant contingent liabilities in both Canada and the United States, including for potential civil damages and potential criminal, quasi-criminal or administrative penalties and fines, which cannot be reasonably quantified.

As of February 29, 2020, CannTrust had a cash balance of approximately $159 million. CannTrust and its Board of Directors continue to monitor the Company’s cash balance and other factors carefully to, among other things, assess various strategic alternatives while pursuing the Company’s remediation work. CannTrust reiterated that the nature, timing, and outcome of the Board of Directors’ ongoing strategic review process will be influenced by, among other things, the Company’s ability to extend or renew insurance coverage on acceptable terms, whether or when Health Canada reinstates the Company’s licenses, how long it will take to restore operations and expectations regarding the resolution of the Company’s contingent liabilities, and potential civil, criminal, quasi-criminal, administrative and regulatory actions in both Canada and the United States.

On February 28, 2020, CannTrust announced that the Company received written notification from the New York Stock Exchange (the “NYSE”) that CannTrust is no longer in compliance with the NYSE’s continued listing standard rules because the per share trading price of the Company’s common shares has fallen below the NYSE’s share price rule. Under NYSE rules, the Company can regain compliance at any time during the six-month period if its common shares have a closing price of at least US $1.00 on the last trading day of any calendar month during the period and also have an average closing price of at least US $1.00 over the 30 trading-day period ending on the last trading day of that month or on the last day of the cure period.

CannTrust has six months from the receipt of the notice to regain compliance. During this time period, the Company’s common shares will continue to be listed and trade on the NYSE as usual.

(ii)
The Company intends to continue to comply with the alternative information guidelines of NP 12-203; and,

(iii)
Except as previously disclosed, there are no subsequent specified defaults (actual or anticipated) within the meaning of NP 12-203
Forward-Looking Statements

This press release contains “forward-looking information” within the meaning of Canadian Securities laws and “forward-looking statements” within the meaning of the United States Private Securities Litigation Reform Act of 1995 and other applicable United States safe harbor laws, and such statements are based upon CannTrust’s current internal expectations, estimates, projections, assumptions and beliefs and views of future events. Forward-looking information and forward-looking statements can be identified by the use of forward-looking terminology such as “believes”, “expect”, “likely”, “may”, “will”, “should”, “intend”, “anticipate”, “potential”, “proposed”, “estimate” and other similar words, including negative and grammatical variations thereof, or statements that certain events or conditions “may”, “would” or “will” happen, or by discussions of strategy.

The forward-looking information and statements in this news release include statements relating to the corrective actions being taken by the Company, and Health Canada’s pending determinations. Forward-looking information and statements necessarily involve known and unknown risks, including, without limitation: actions taken in respect of the Company’s products by its customers and regulators; results of Health Canada’s investigation, including orders and compliance measures required by Health Canada and their impact on the operations, inventory, assets and financial condition of the Company; the Company’s implementation of remediation plans and related actions; regulatory approval; the outcome of the Company’s contingent liabilities; the impact of potential regulatory investigations; the Company’s review of strategic alternatives; risks associated with general economic conditions; adverse industry events; loss of markets; future legislative and regulatory developments in Canada, the United States and elsewhere; the cannabis industry in Canada generally; and, the ability of CannTrust to implement its business strategies.

Any forward-looking information and statements speak only as of the date on which they are made, and, except as required by law, CannTrust does not undertake any obligation to update or revise any forward-looking information or statements, whether as a result of new information, future events or otherwise. New factors emerge from time to time, and it is not possible for CannTrust to predict all such factors. When considering these forward-looking information and statements, readers should keep in mind the risk factors and other cautionary statements in CannTrust’s Annual Information Form dated March 28, 2019 (the “AIF”) and filed with the applicable Canadian securities regulatory authorities on SEDAR at www.sedar.com and filed as an exhibit CannTrust’s Form 40-F annual report under the United States Securities Exchange Act of 1934, as amended, with the United States Securities and Exchange Commission on EDGAR at www.sec.gov (the “March 2019 Form 40-F”). The risk factors and other factors noted in the AIF could cause actual events or results to differ materially from those described in any forward-looking information or statements. Readers are also reminded that CannTrust remains in default of its periodic disclosure requirements under applicable securities laws and stock exchange requirements, that its most recent AIF, Form 40-F and other disclosures do not reflect all risk factors that currently face the Company, and that the Company has not completed or filed the restatements of the financial statements included in the AIF or the March 2019 Form 40-F or otherwise filed an amendment to such Form 40-F.

The TSX and NYSE do not accept responsibility for the adequacy or accuracy of this release.