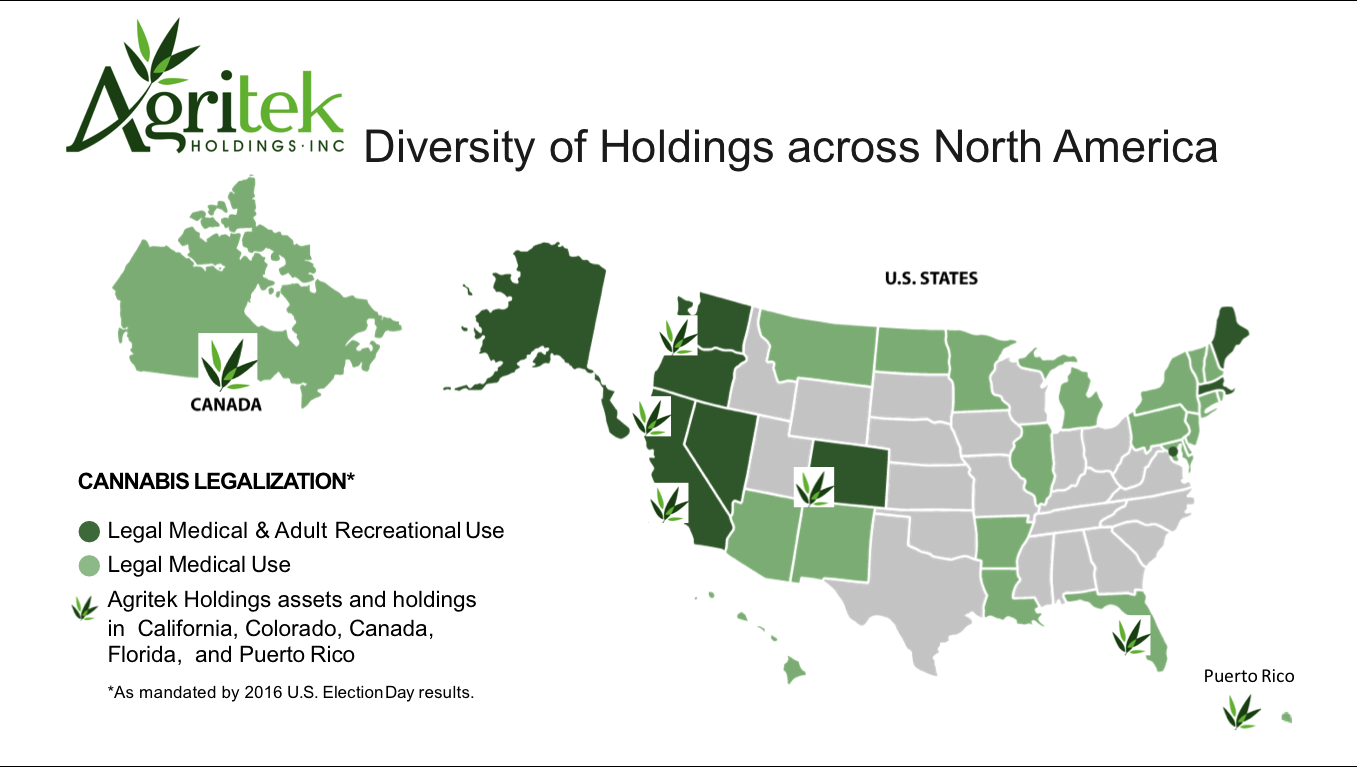 As state laws previously restricting cannabis investment and sale changes, so will the structure of the entire cannabis industry. We’re seeing this play out from Miami, Florida-based Agritek Holdings, Inc. (OTCMKTS: AGTK). The fully integrated, active investor and operator in the legal cannabis sector just announced that it has negotiated terms and effected a Letter of Intent to acquire a recreational manufacturing license and vape company based near Vail, Colorado.

Reacting to the change in legislature and the pending acquisition, the CEO of Agritek Holdings, Inc., Neil Mundie said, “This change in legislation and state law is expected to bring new cannabis products to Colorado from public companies like ourselves that have previously stayed away from the state due to licensing issues not offered to public companies. We expect the new opportunities will also accelerate consolidation and increase M&A activity, with large national chains and public deals purchasing Colorado’s smaller cannabis companies seeking cash infusions.”

The previous limitations came to an end recently with Gov. Jared Polis’ signing the new legislation last month which allowed outside investments from public companies for the first time in Colorado. Agritek Holdings, through its Denver-based subsidiary, “American Hemp Trading Inc.” can now acquire Colorado based companies. Consequently, this may lead to a spike in Agritek’s annual revenue.

Credible reports shows that some of the largest cannabis-based companies in the state including Beyond Broadway LLC, Medicine Man, The Green Solution, and Native Roots spent a combined $69,251 to lobby lawmakers to support the bill.

Further explaining Agritek’s expansion plans, Mundie said, “We expect Agritek Holdings to complete this proposed acquisition of our new manufacturing license and operation including its popular vape and flower brands with distribution presently in Vail and Aspen. Further, we are seeking expansion of our hemp cultivation operations within Colorado Springs also presently under negotiation.”

Soon after the passing of the bill, Medicine Man Technologies announced that it can now acquire Medicine Man Denver and MedPharm Holdings.

It took a while for Colorado to shift grounds on cannabis investment but do you see another U.S. state doing same any time soon?